Spinning upwards into whiteness, mud hurled everywhere. Ground saturated, movement possible only by dropping tire pressure and pedaling in an ever lower gear. Andean rainy season in all of its menace. Paul just visible ahead, a vague bicycle shape silhouetted against a background of mist.

3 hours of climbing in rain just light enough to make everything damp, find a stream gushing water and call it quits for the day. Set up camp fingers trembling, don’t care how much the ground slopes, will get in later and sleep contorted to avoid the larger lumps. Peel off wet clothes and open the drybag protecting the warm stuff, only to find it wasn’t closed properly, and that stuff is a little damp too. But less so, so it’s ok. Slide into sleeping bag and lie there getting warm, an hour and a half rest before going back outside for dinnertime.

END_OF_DOCUMENT_TOKEN_TO_BE_REPLACED

Spend time in Huaraz and the trekkers flocking to the mountain city namedrop Huayhuash, that snowy peak filled range just to the south. The trekkers go out for a 10+ day hiking route there. Cyclists tend to spend some time kicking back and then setting out for Peru’s Great Divide route, a high altitude remote dirt road network effectively linking Huaraz to that other mountain capitol farther south, Cusco. But before you know it, you’ve spent a month staying put sleeping in a bed, resting from the exertions of the last leg and working on side projects.

A month off the bikes calls for a little something something special to get going again. Maps record a thin black line leading to a red one ending with a dotted black line offshoot. So theoretically a route exists, dirt roads to the start of the Huayhuash trek and after getting over a short section of trail, mining roads should link up the villages on the eastern side of the range before coming back west to the main Divide route. Uncommon sense says this would be a good idea, a bikepacking opportunity to test new bike setup iterations and a chance to explore even more of Peru’s back roads. The Divide route promises the latter too; in the mere year since the Pikes pioneered the route it’s well on its way to becoming a Panamerican classic. But the size and scope of Peru’s mountains means that however many cyclists ride through, there will always be more unexplored dirt roads taking you wherever you want to go. So Paul and I set off looking for some. 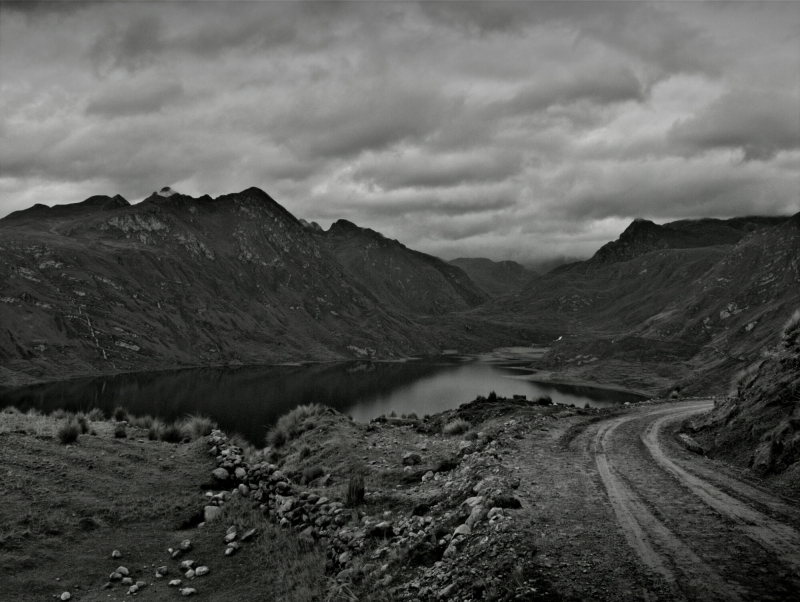 END_OF_DOCUMENT_TOKEN_TO_BE_REPLACED

Rest day contemplation, looking three weeks ahead three weeks ago now. The Cordillera Blanca with its stunning snow-capped peaks waited ahead of us, the mountain city of Huaraz there, our next planned major rest. Glory-seeker cyclists can make a loop out from Huaraz eastward over one pass in the Cordillera and returning westward over the second pass. One pass is paved, 4900m, the other dirt, 4700m, you pick which one you want to do first. No other passes with road approaches in the northern heart of the range. Huaraz departure allows for leaving behind unnecessary gear, less weight then to lug up and over. This loop then a pure masochist’s effort: thousands of meters of climbing, against altitude hypoxia, cold, and variable weather, only to return to where you started from.

Paul and I had no excess weight to leave behind. And we may come from ride-your-bike-in-circles racing backgrounds, but now we’re acting touring cyclists, wanting to ride in a continual southern progression. So, seeking stellar mountaintop views, how to ride both passes? Three options (3 the recurring theme here):

END_OF_DOCUMENT_TOKEN_TO_BE_REPLACED

In the beginning, centering this trip around riding dirt roads was an idea, a goal. Now it’s become reality. Paul and I jetted out from Cajamarca almost three weeks ago, finally arriving in Huaraz, spending some 850km linking up one remote village after another. And to finish with a finale, we ended this leg with the premiere Cordillera Blanca Triple Heart Bypass- but more on that to come in the next post. First up, the beginnings of our expeditions into El Silencio regions.

No hay nada arriba, everyone warns. Just the way we like it.

END_OF_DOCUMENT_TOKEN_TO_BE_REPLACED 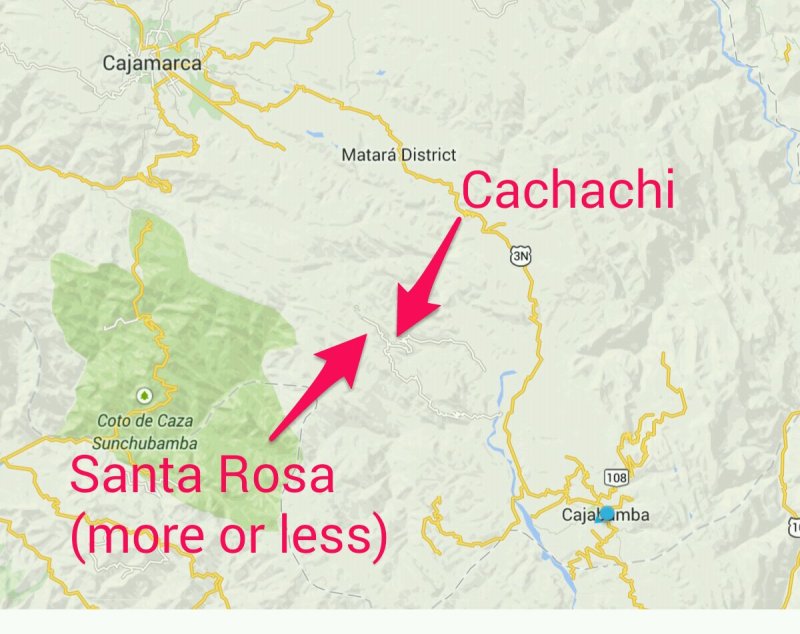 Things started ok. Two shepherds watching their flock came running up to ask who we were, what we were doing. Normal. Less normal was when they wanted us to accompany them to meet unknown-spanish-word up the road, to the point where one put a hand on the bike’s handlebars to stop me from leaving without him. Suspicions rising.

Northern Peru, Cajamarca province. The Spanish came to the Andes in the 1500s looking for gold. Whatever they found, they shipped back to Spain. 500 years later, mining rights to Peruvian gold, silver, copper, plus many more mineral deposits are sold to foreign companies who come in to extract as much as they can. Peru the country might profit from this, but less so the people living in the immediate vicinity. Cajamarca, one of the richest states in terms of mineral resources, is one of the poorest states in terms of personal wealth.

END_OF_DOCUMENT_TOKEN_TO_BE_REPLACED 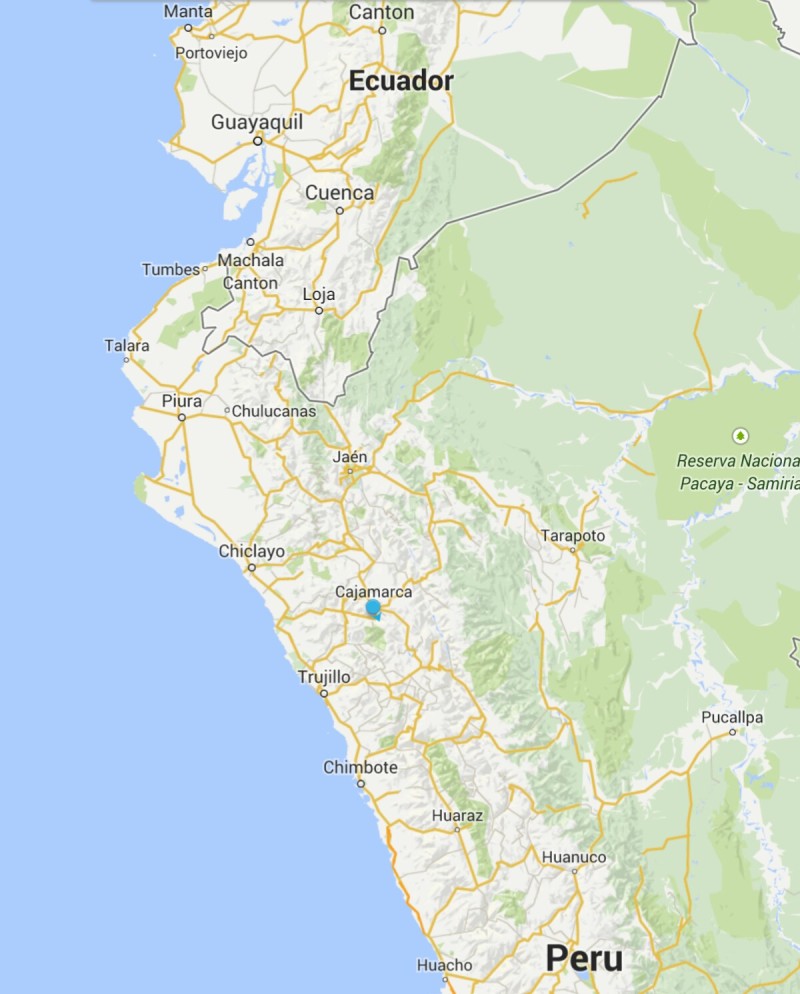 Country #11. Below, my typical daily view on this stretch, from Cuenca in Ecuador to Cajamarca, Peru: 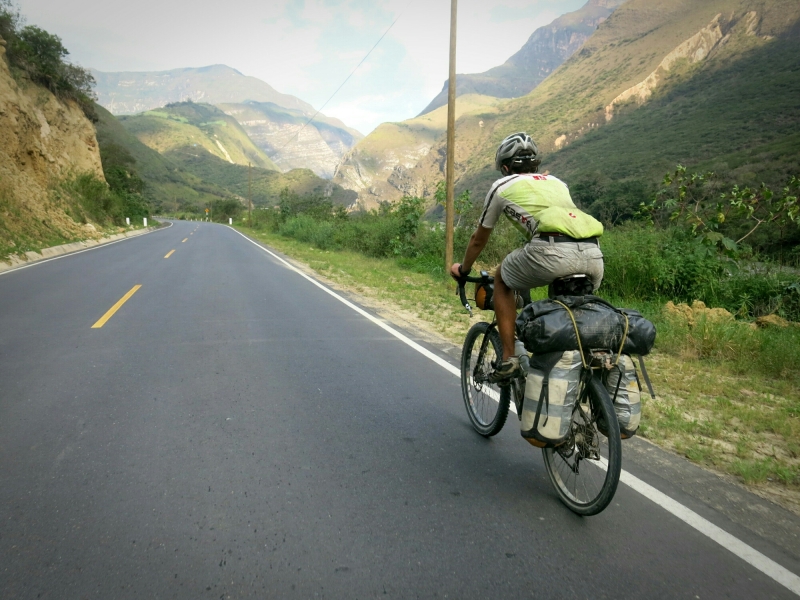 Our start in Peru fast paved riding, banana tree surroundings harkening back to the first days in Colombia and every single Central American country. The paved road at first climbs into the hills, asphalt progress incongruous against the slow pace of the villages it passes through. Adults sit on chairs, benches beside the road there, the towns just collections of houses one or two rows deep on either side of the road. Children play in the street around the coffee beans sun-drying on black plastic tarps, village chickens pecking their way among them. Will spend the most time in this country out of any since the US. Mountain roads calling, the highest stretch of Andean cordillera here, thanks to extensive research by other cycle tourists long stretches of mapped out routes await too. Immigration official gives us 3 months visa time, probably just barely enough. A Canadian ex-pat says no problem to stay past the visa date, just then have to pay $1/day for every extra day. Have another reason to maintain southerly progress, in less than three months the transition to the rainy season scheduled to start. So ample external motivation to keep moving.