A rest, here, for 5 days, the first actual rest in Mexico. Anonymity in the enormous city, in the hostel too, Ace hides in a safe place on the roof so to everyone else at the hostel I’m just some scraggly bearded American wearing the same clothes over and over. Which we’re all doing but rain pants and a cycling cap, what’s with that bro? 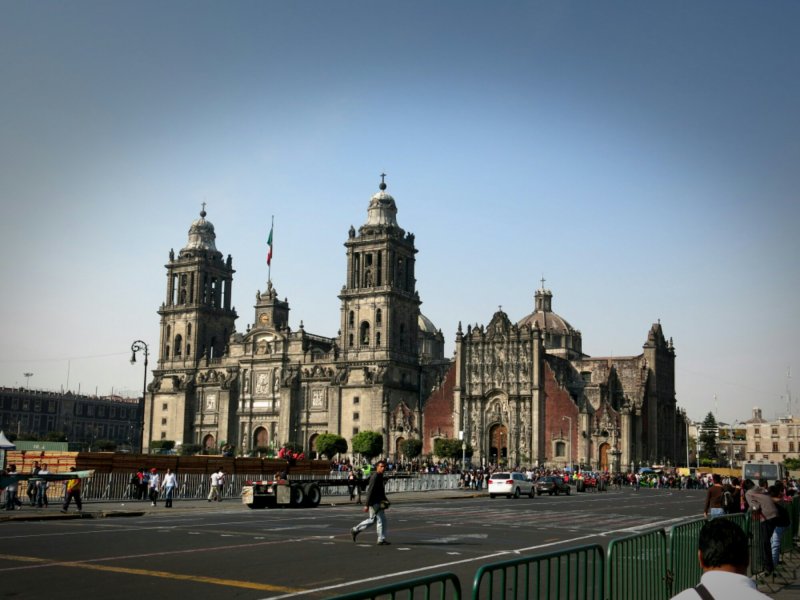 I’m here with Daniel, below, who biked across the US last year and just graduated from Ohio State, moving to Sacramento soon to start working with AmeriCorps. Thanks for coming to visit! 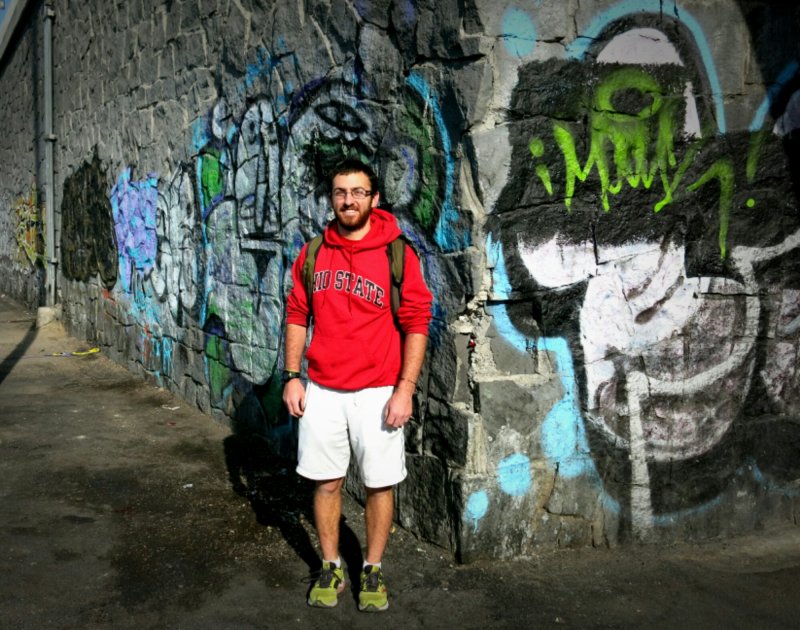 We spend the days touring the city, eating, playing cards. This city is epic, so much character, so much to do. We stayed in the city center by the Zocalo, the central plaza.

Coyoacan lies south of the city center. It’s a beautiful colonial center, where Cortes originally built his home until problems with the Aztecs forced him to move back to their part of the city. There are big indoor markets here, street artists outside, cobblestones and elaborate churches. Also apparently an extremely popular coffee shop, just look for the place where everyone -everyone- is walking away from with a take-out cup decorated in the red, white, and green of the Mexican flag. Frida Kahlo’s home, the Blue House, it too is in Coyoacan as well. The house is a kind of contradiction, vibrantly painted, visually beautiful, but the artwork and the history of Frida inside bears witness to the pain and struggle of her life. 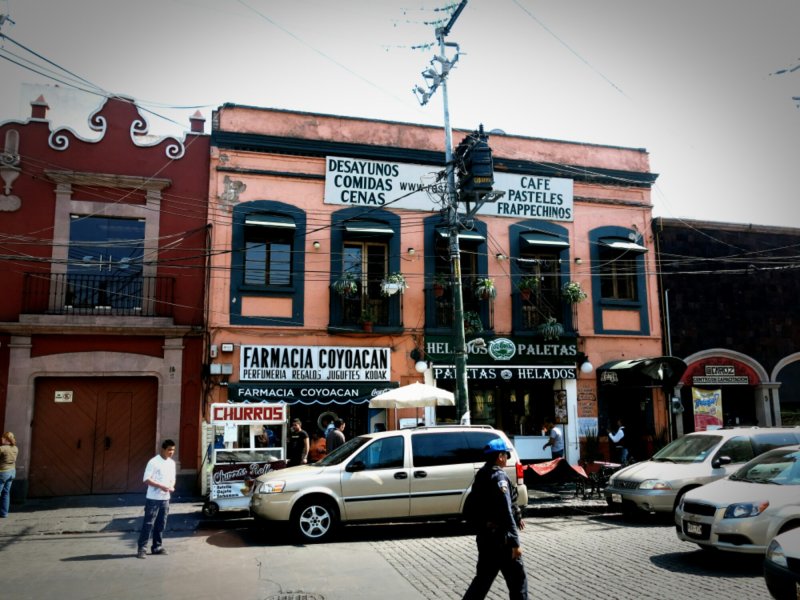 Then there’s Xochimilco, south-southwest of the center. The area is full of canals, upon which people rent long, flat boats and are paddled around for an hour or two or three, perfect for a little fiesta on the water. Mariachi bands and food vendors float around on boats of their own, entertaining, feeding. 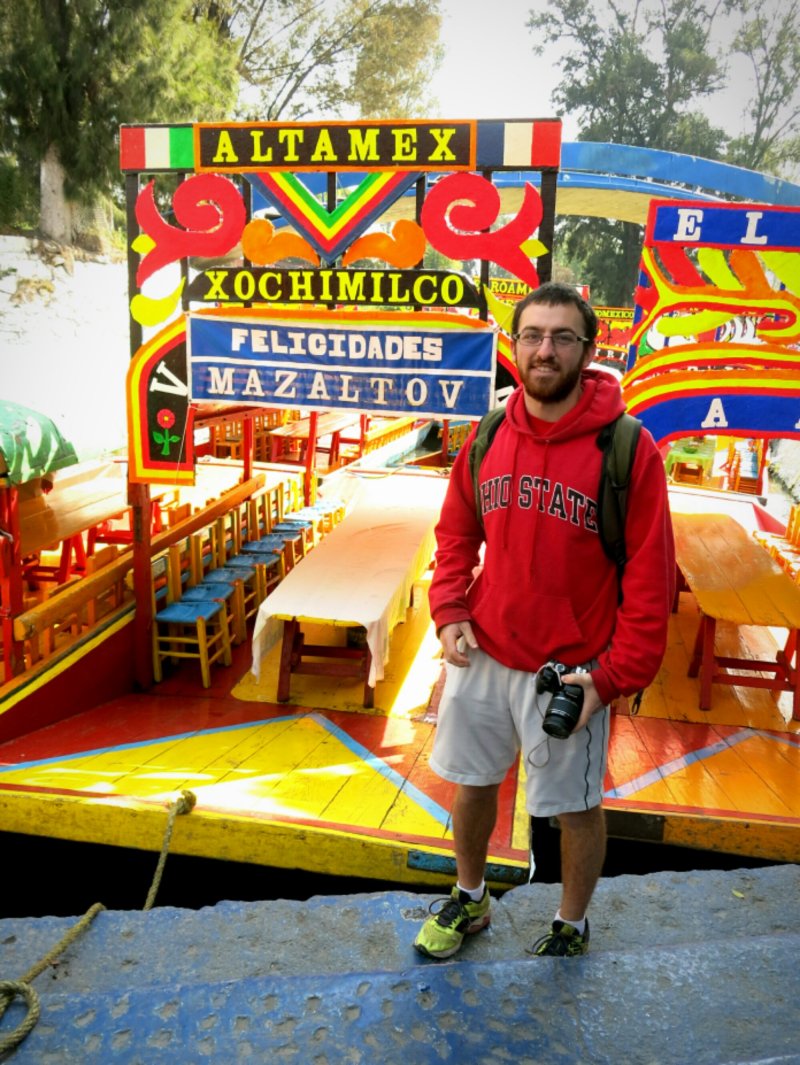 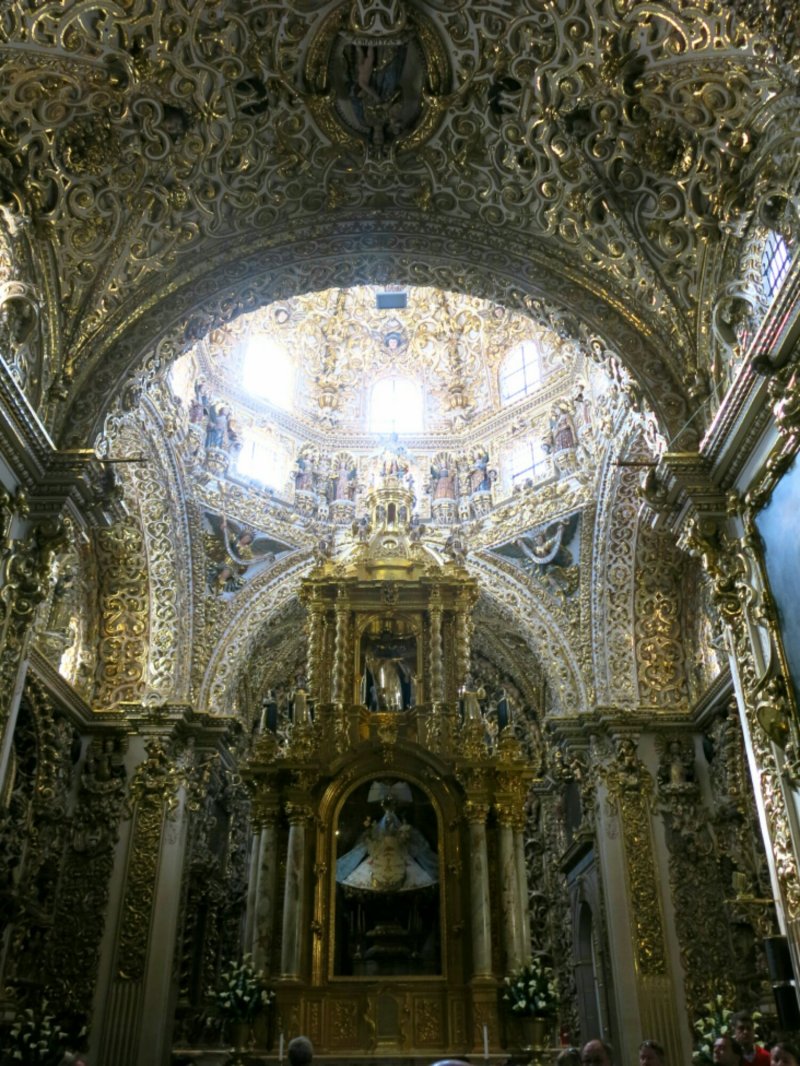 And a day tour to Puebla, a colonial city to the west of the city famed for its churches. Here, the Chapel of the Rosario, was deemed the eighth wonder of the Old World when completed in the 17th century, due to its ornateness. Every surface inside covered with gold gilding, unbelievable.

More, on top of the world, the view from the Pyramid of Cholula, third largest pyramid in the world. Although the Spanish built a church on top of the pyramid, and now the pyramid itself is a tad overgrown with grass and trees, so from many angles tends to resemble a large hill.

Not to be missed, anywhere in Mexico, are the panaderias. All of these bakeries, phenomenal! Variety in opulence, from sugar-cookies to the Mexican conchas, those balls of soft enriched dough with a hardened sugar coating resembling a sea-shell, to cake “popsicles”, to whole wheat biscuits with a light chocolate coating. We did our due diligence tasting as many as we could… 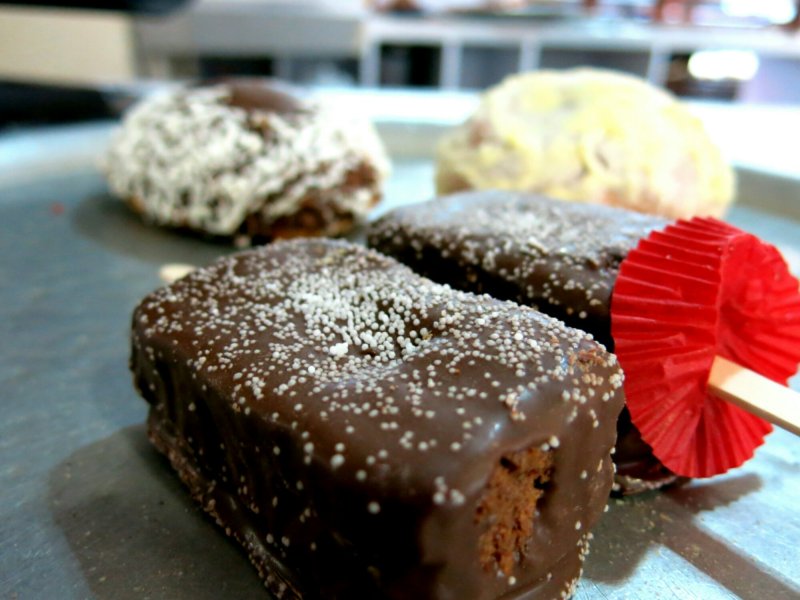 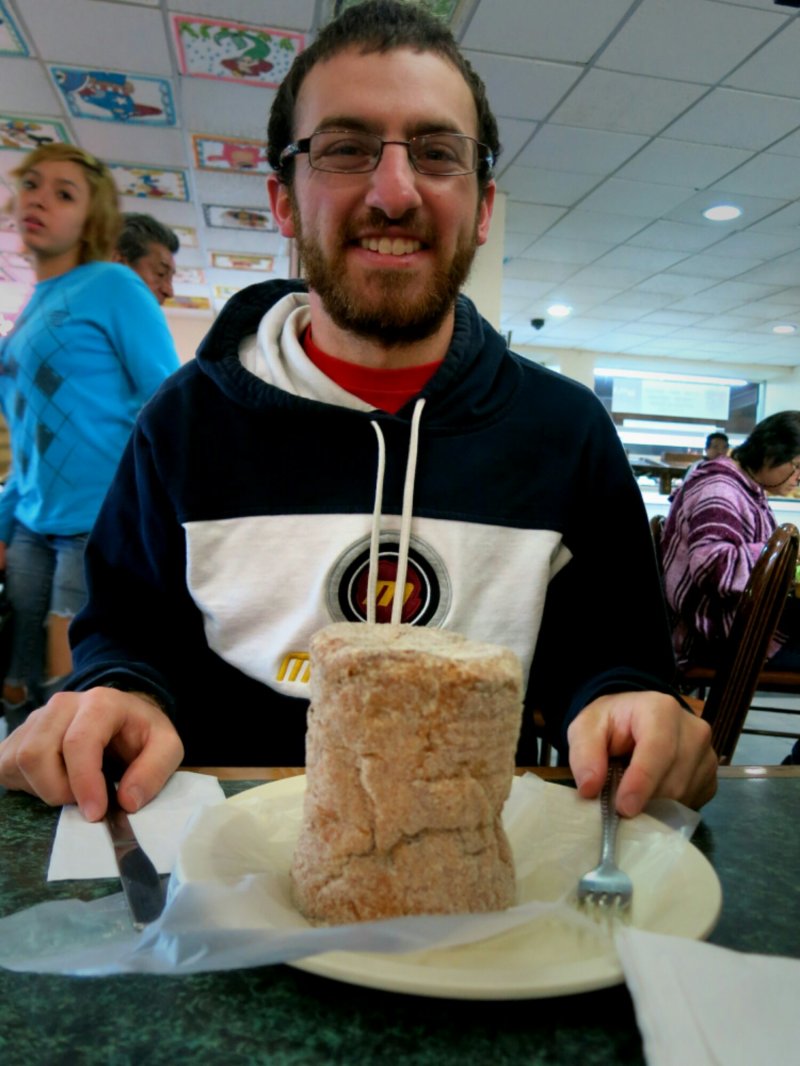 Save room for dessert… Or maybe midday snack?

Some of the best whole wheat pastries ever. So filling, and so tasty. Those rectangles in the background? Perfect for soon-to-be-less-hungry cyclists.

Also, our favorite quesadilla stand in the city. Figuring out the Mexican eating times has taken a little while. Many street food stands are open starting late morning until the evening, but promptly close at 5 or 6. The Mexicans favor a more substantial lunch and a (much later) lighter dinner, not exactly the American schedule. 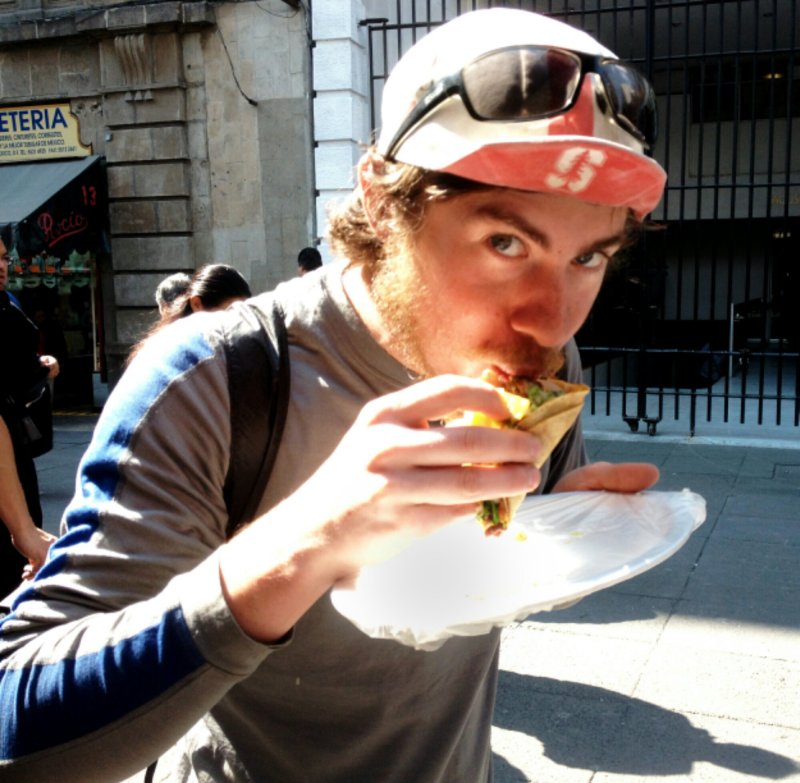 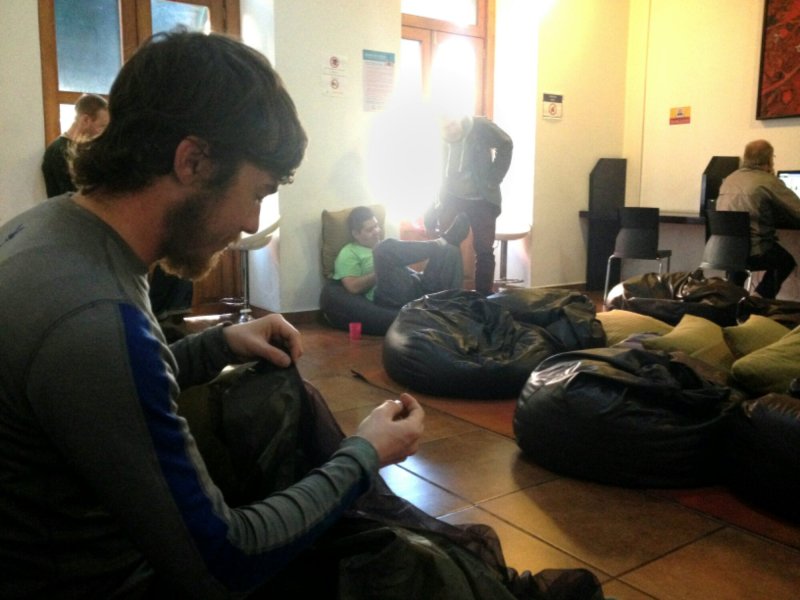 But not everything is fun and games and food. A week or two ago some leaf-cutter ants visited me and the tent one night. Apparently they have a taste for tent mesh, so the inner layer of my tent now has quite a few holes and tears. A morning spent sewing up the worst offenses, productive, though now portions of the mesh look like there are giant spiders crawling up the sides. Quite a sight to wake go to. But so far it’s still usable, so that’s that.